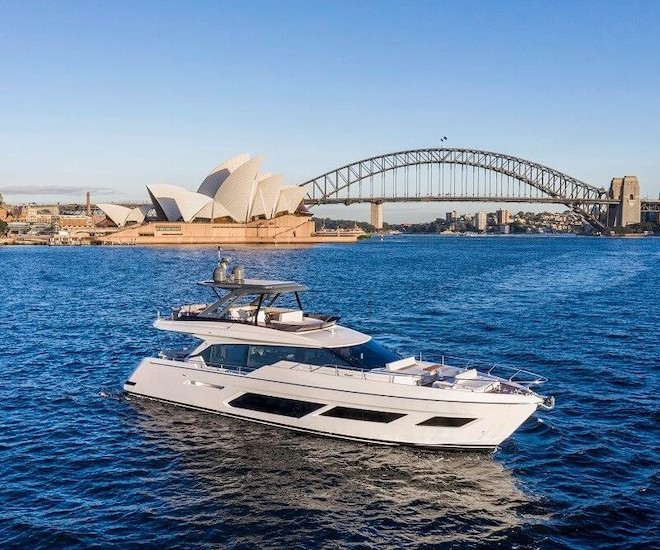 The first Ferretti Yachts 720 to be sold in Australia has officially made its debut in the waters of Sydney Harbour. Part of the new series of Ferretti Yachts models with an exterior by Filippo Salvetti, the 720 had its world premiere at the Cannes Yachting Festival in 2019.

The Sydney’s owner customisations include the exterior gel coat burnished in a brilliant white shade in place of the standard crème. The interiors feature bespoke touches such as the ebony wood saloon sideboard, cabin walls covered in lush Indian linen from Casamanche, wood finished in a delightful semi-gloss walnut wash, and even a fully customised audio, video and data system.

The Ferretti Yachts 720 has an overall length of 22.3m (73ft 2in) and a beam of 5.6m (18ft 4in). With twin MAN V12 engines, the yacht has a top speed of 32 knots and a cruising speed of 28 knots, and options include a stabilisation package with two Seakeepers.

The hydroelectrically controlled swim platform offers direct access to the waters and a roomy transom capable of holding a 3.95m tender or three-seater jetski. The foredeck is another popular outdoor area and can transform between a large sunpad and a comfortable dining area.

The 31sqm flybridge has a second helm station as well as an enormous sunbathing area forward, covered dining and an open area aft for sunbeds.

Breitling Ambassador Caxsandra Tan Talks About Female Empowerment
How to turn around a toxic culture
DEI Matters More Than Ever In The Red-Hot Talent War—Here’s How To Kick-Start Your Journey
10 Eligibility Criterion To Own A Rolls Royce
YYachts Custom Yacht Tripp 90 Prevail: Review