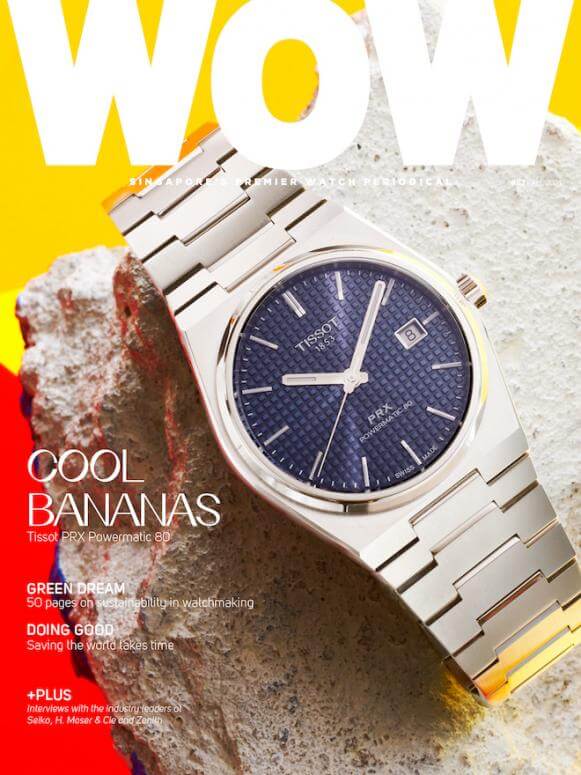 The Autumn issue of World of Watches (WOW) Singapore leans heavily into the issue of sustainability as it relates to watchmaking. This is hardly our first foray into this subject, but it is our most extensive ever, with the majority of the issue given over to it.

We have covered sustainability in watchmaking since the first manufactures started introducing carbon neutral production. If you count all the ocean conservation work that some key brands engage in, this history goes all the way back to our roots in 2001. Things have come a long way since then, but perhaps not quite far enough. This Autumn issue is our first stab at covering sustainability across multiple facets in watchmaking. The only thing missing here are a few manufacture visits, but that is to be expected.

You might wonder why the fuss right now, but it should be no surprise if you have been paying attention to the climate reports out this year. Entire industries are facing the prospect of retooling for a very different future, including the car industry in Germany. In that important sector, German marques actually led the way not long ago, only to be eclipsed by the force of nature known as Tesla. There are lessons here for Swiss watchmaking.

Watchmaking is the third largest export industry in Switzerland, accounting for 1.5 per cent of GDP in 2020. It ranks behind only pharmaceuticals and the production of machine tools. Swiss watchmaking is famously outperformed by Apple, in terms of volume, but it accounts for more than 50 per cent of the value of global watchmaking. In higher price segments, there is even greater distortion with 95 per cent of all watches priced above CHF1,000 being Swiss Made. This is a good enough reason for the Swiss public to care about what watchmaking is doing to make the world a better place. As the buyers of these watches, we should also care. After all, we vote with our wallets.

This is precisely why we have dedicated this issue to sustainability in watchmaking, and found all the above info from the Swiss Broadcasting Corporation. Apart from presenting the problem, we also venture a solution, but I shall not repeat myself. Instead, I’d like to go outside watchmaking, into the world of boating. Retired Formula 1 champion Nico Rosberg, in working with Sunreef on sustainability makes a great point that people buy yachts to impress. Soon enough, nobody will be impressed by something that is bad for the world, especially amongst the younger generation.

Rosberg is also reportedly a watch lover, even outside of his sponsorship deals. I’ve seen people gush over his tastes, in public forums no less (so you can find it too). No doubt he — and many others — might be distressed to learn that watchmaking is not moving fast enough on the issue of transparency. As H. Moser & Cie CEO Edouard Meylan tells us in this issue, watchmaking is far from the dirtiest trade out there. Indeed I would argue it has many positives going for it. Yet the brands are in danger of squandering the public’s goodwill by not going all-in on transparency, while attempting to benefit from the idea that a mechanical watch is inherently sustainable. Already the Wikipedia pages of a number of big Swiss names have been darkened by the WWF watchmaking report of 2018. It is time the brands took some action to address these shortcomings. It can all begin with some non-financial climate-related disclosures. We are looking forward to covering it.

While we sought out a confluence between Swiss watchmaking and sustainability, for reasons that will become apparent when you read the pieces, we also wanted to engage the wider industry, which is what we did in our interview with the new President of the Seiko Watch Corporation, Akio Naito. This conversation had more to do with Grand Seiko, which is apt given its nature-based themes, and the sports watch, which is a big deal for both Grand Seiko and Seiko.

I’ll end this missive on a note about our cover and the story that accompanies it. The Tissot PRX Powermatic 80 is one of the most appealing watches I have ever handled, and I confess that I might yet pull the trigger on it myself. For the sake of transparency, I am not seeking any special treatment from Tissot, nor has there been any quid pro quo, as they say, with regards to the cover or the story, other than what is proper between a magazine and a brand. With that, I leave you to enjoy the issue in your hands…

Women Are Essential To Post World COVID-19 Recovery Plans
Overcome Kubernetes Data Gravity and Accelerate Digital Transformation
The Best of Both Worlds: 3 Reasons Why In-Person Offsites Should Be Part of Every Remote Workforce
Review: Monaco Yacht Show 2021
In a world as drastically divided as ours, empathy is more critical than ever for effective and inclusive leadership.