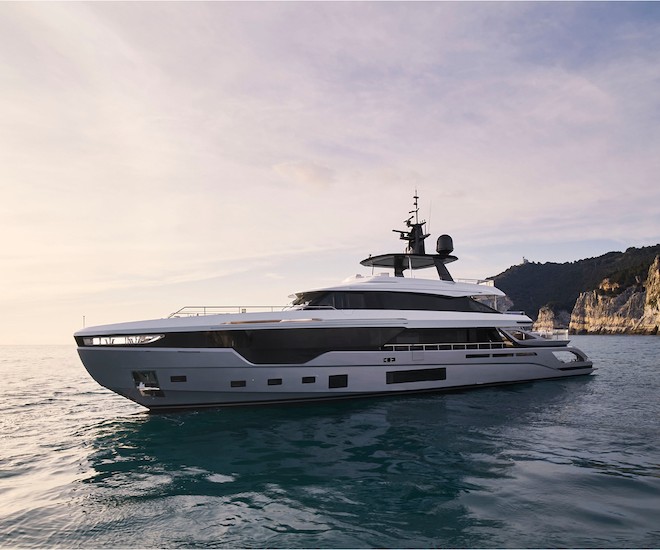 Never a day of rest for the Azimut Grande Trideck — from its world premiere at the Cannes Yachting Festival in September to the Monaco Yacht Show later that month, the new 38m flagship from the Italian builder concluded its showcase at the Fort Lauderdale International Boat Show in America at the end of October.

While yacht lovers in Europe and Asia got to catch a glimpse of this new beauté, it won’t be long before Asia gets it to see the yacht. The first unit in the region is set to arrive in Singapore in 2023 following a sale to an existing Azimut owner who’s upgrading from a smaller Grande. Among the Trideck’s double-digit global sales, the Singapore order was secured by Marine Italia, which also represents the brand in Hong Kong, Macau, Guangdong province and Taiwan.

“A key feature of the Trideck is how the design team have focused their attention equally on both the interior and exterior spaces,” says Paul Grange, COO of Marine Italia and co-founder of the Hong Kong-headquartered company with Thomas Woo.

“The interior layout provides clients with great flexibility to have luxury private dining rooms, comfortable saloons and entertainment rooms according to their preference.

“As an example, it can have up to six en-suite cabins, but the Trideck for Singapore will feature a custom interior layout with four guest cabins, with the other spaces used for the family’s requirements.”

The Trideck marks the regional dealer’s third superyacht sale for Singapore this year, following a Grande 32 Metri and a Benetti Oasis 40M in collaboration with Benetti Asia.

They’re just one part of a strong run of sales by a company announced in September as Azimut’s second-most successful dealer over the past year, behind only US giant MarineMax.

Grange estimates there are about 30 Grande superyachts in Greater China and Southeast Asia, with over half of those in Hong Kong where new models delivered over the past year range from the 25 Metri to two units of the 35 Metri, the brand’s former flagship.

Although the 35 Metri has a fourth ‘level’ that’s effectively an aft extension of the flybridge’s hard top, the Trideck is a true tri-deck design. In fact, the builder promotes it as a ‘Three Decks + One’ due to the signature sea view terrace at the aft end of the main deck.

With an overall length of 125ft 5in, the Trideck is 10ft 7in longer than the Grande 35 Metri and features an exterior by Alberto Mancini, who designed the Grande S10 launched in 2019 and has effectively succeeded the late Stefano Righini who had collaborated with Azimut since the late 1980s.

The Trideck has an 8m (26ft 2in) beam and a sub-300GT volume, but feels bigger due to some clever design work. For example, the voids in the bulwarks either side of the beach club not only provide window-like views but also prevent the area being considered as internal volume.

Once the transom folds out, the full-height beach club offers over 320sqft of space, which includes a day head, an enclosed wet bar, an outdoor shower and lockers for water toys such as scuba diving gear and Seabobs. There’s further storage below, via a deck hatch.

The beach club is sheltered by the similarly sized sea view terrace, arguably the yacht’s most distinguishing feature. Up five starboard steps from the main deck, it offers a lofty platform that overlooks the water on three sides and has an enormous C-shaped sofa that offers a variety of sea views.

As well as sheltering the beach club, the sea view terrace also disguises the private patio outside the saloon doors.

The clever design, which Mancini used on the Grande S10, ensures privacy from prying eyes on the docks while moored stern-to, and on the Trideck the patio is big enough to fit a large, foldable table for eight. This area also benefits from bulwark cut-throughs that are covered by plexiglass to provide wind shelter.

Azimut describes it as a private patio because the main alfresco dining area is aft on the upper deck. And what an area it is, with a huge table set lengthways that’s wide enough to sit two people at one end and can extend to fit 12. There’s also a bar to port and a corner sofa by the stairs up to the sun deck.

The sun deck is a gorgeous area, dressed on hull one with three sun loungers aft, as well as gym equipment. The covered central area features a circular lounge with two curved, facing sofas and a cabinet housing a TV that can rise and rotate. Forward is a tall bar with stools offering great panoramic views, including overlooking the forward barbecue.

Flexible interiors on the Trideck

With Grande sales driving an increasing amount of the company’s business, the Trideck was developed to satisfy demand for larger yachts, yet it was also designed to appeal to a newer, less traditional generation of owners — or clients who simply want more choice in how their yacht is configured.

Achille Salvagni has designed the interiors of all the current Grande models, but the Trideck is the first without a formal dining area on the main deck, based on the feedback that most clients typically eat outdoors unless the weather prevents them from doing so.

Instead, the main saloon is classic Salvagni, with a huge J-shaped sofa, two coffee tables and two circular chairs, all custom designed and offering plenty of space to walk through or around the lounge, enjoying the full-height windows.

Salvagni is renowned for his curved furniture and lamps, and use of light, pastel colours, although the latter is offset by glossy dark-mahogany cupboards on each side. Rounded and oblong shapes and cut-outs decorate the ceiling.

With your eyes glued to the furniture and views, you can even miss a trick or two coming in. For starters, there’s a wide mahogany bar tucked inside the sliding door at the entrance, positioned to serve both the indoor and outdoor areas.

However, less expected is the enormous 72-inch TV that slides out of the aft starboard corner and turns the saloon into a roomy media hub.

The starboard hallway for guests leads past the galley to the full-beam master suite, which starts with a dressing area with cupboards on two sides, while a seemingly floating curved desk and two chairs sit below the large window.

The bed is set on the port side and faces forward to the bathroom, where the sliding mirrored door housing the TV is flanked by stunning drawers that Salvagni designed to replicate the shape of samurai armour.

Salvagni designed the bathroom for the door to remain open, when possible, as it offers an attractive view of a beautiful round tub that gives a spa-like ambience and sits beside the shower to port side.

This sense of a wellness area is deepened by textured Cardoso stone for the flooring and a smooth version for the twin-sink countertop.

The guest hallway also houses the stairway that links to both the lower and upper decks but also allows Salvagni to show off some of his most beautiful design work, playing right into his love of curves and organic shapes.

The lower deck has two aft VIP cabins featuring the Samurai-themed drawers and two guest cabins, all with en-suite bathrooms.

The Trideck represents a new generation of megayachts

Although there are side decks on the main deck, there are none on the upper deck, which means the upper lounge is almost full-beam. The standard layout includes a large semi-circular sofa and a rounded coffee table on the port side, plus chairs, table and retractable TV to starboard.

When desired, the lounge doubles as the indoor dining room, with the table elevated and expanded with the addition of extra leaves. Azimut does offer owners the option of having a formal dining area in this room — as it does in the main saloon — although most owners have chosen the standard upper-lounge layout.

Forward is the ‘sixth cabin’ in the six-cabin version, the room featuring elegant leather cases hanging below the port window. However, owners can also choose to use this space as a combination of both a captain’s cabin and an upper pantry that’s connected by stairs to the main galley below.

“The Trideck’s innovative layout and flow create a seamless luxury environment, but also offers plenty of separate spaces for owners and guests to enjoy the yacht the way they want to,” Grange says.

The impressive pilothouse has side doors that lead to the foredeck, which is a gorgeous outdoor area centred around a circular jacuzzi surrounded by flexible seating and sunpads, providing an infinity view over a forward seating and sunbathing area protected by a low screen.

As well as enjoyable outdoor spaces and stylish indoor areas, the Trideck offers an eco-friendly ‘hotel mode’ as an option, with lithium ion battery packs able to power onboard systems for up to four hours during the day or up to eight hours at night, when demands are reduced.

The Trideck also offers impressive performance for a yacht of this size. As well as extensive use of carbon-fibre in the superstructure helping to reduce weight, the 125-footer features the second generation of the ‘D2P’, the displacement-to-planing hull with wave piercer initially developed for the Grande 35 Metri in collaboration with P.L. Ausonio Naval Architecture.

Improvements have been significant because despite being over 3m longer and 30 tonnes heavier than the 35 Metri, the Trideck has significantly less consumption up to 15 knots and similar economy for faster speeds.

Fitted with either 2,400mhp or 2,600mhp MTU engines, the new hull offers two ‘peaks’ for fuel efficiency, one at displacement speed and one at fast cruising, so satisfying demands for both types of navigation.

“One of the key features of Azimut Grande is that it offers superyacht levels of comfort and volume but still with full planing performance. In the case of the Trideck, that’s speeds up to 24 knots,” Grange says.

“However, for long-range cruising at slower speeds, she can still offer a range of nearly 2,000nm, which shows the efficiency and versatility of the design – equally at home as a fast weekend cruiser or as a long-range luxury cruiser.” As with many aspects of the Trideck, the choice is yours.

Prevailing in the Arena
Most expensive shoemakers and their best collection
Movement Mortgage CEO And Super Bowl Champion Casey Crawford: ‘Make Love Your Core Value’
Most Expensive Shoes Ever Made In The World
Mastering the Art of the Quick Check-In