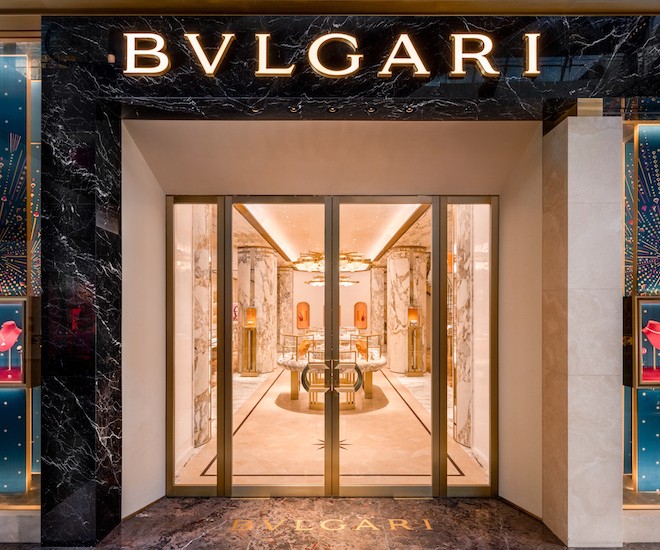 It was a spectacular day for Italian jeweller Bvlgari as it re-opened its boutique at Singapore’s Marina Bay Sands. The interior design of the renovated store has its inspiration from Mediterranean origins and Roman traditions. These qualities are then infused throughout the 467 square metres duplex space — it is as though one is transported to Rome itself.

From afar, the store’s marble and stone design juxtapose with the contemporary setting of MBS, thus creating a continuous interplay between the modern and the past. The Pantheon is a key inspiration for the renowned architect Peter Marino in conceptualising the store and its influences spread throughout the store.

At the storefront, a Black Grand Antique marble portal is used in contrast with the travertino navona square columns. On its sides, there are eye-catching coloured windows, which are dressed in the holiday season theme such as vibrant berry colour to attract and welcome clients.

Another symbolic feature of Bvlgari is also present: the Condotti eight-pointed star, in red porphyry. A universal symbol for balance, harmony and cosmic order, the eight lines represent the four cardinal points and time (two solstices and two equinoxes). This red star first appeared in the historic Bvlgari Condotti store in Rome and now, it is found in all of its boutiques around the world — including this new boutique in MBS.

The star holds the meaning, “Roma Caput Mundi”, meaning that all the routes lead to Rome. And the appearance of the star in every Bvlgari boutique is a unifying symbol and remind of its first store in Rome.

Entering the store, clients will be greeted with oval-shaped counters in light galvanised iron that are inspired by the renowned Italian architect Carlo Scarpa. Clients are invited to browse the boutique and explore its iconic collections such as the Serpenti and Fiorever. Hanging above is a magnificent chandelier by Gio Ponti, illuminating the store and adding an air of grandeur to the place.

Other spaces in the boutique include an oval private salesroom that referenced the days of Elizabeth Taylor when the actress visited Via dei Condotti during the golden years of the Dolce Vita. The brand’s DNA is further enhanced by the series of images and artworks by Andy Warhol.

The delicate balance of the new and the old, tradition and innovation, which defines the Bvlgari spirit and of Marino’s concept, is expressed through the specially chosen décor and furniture. For Bvlgari, this newly revamped space is the embodiment of Italian craftsmanship of the highest order.

Are You Missing Vital Information due to the MUM Effect?
Supratim Talukder Attributes His Divine Gift of Dance to the Gods
WOW Malaysia x Blancpain: A Night To Remember
Cultivate Trust, Hone Human Connections, and Become a Real Leader
How Master Game Players Manage Their Departures