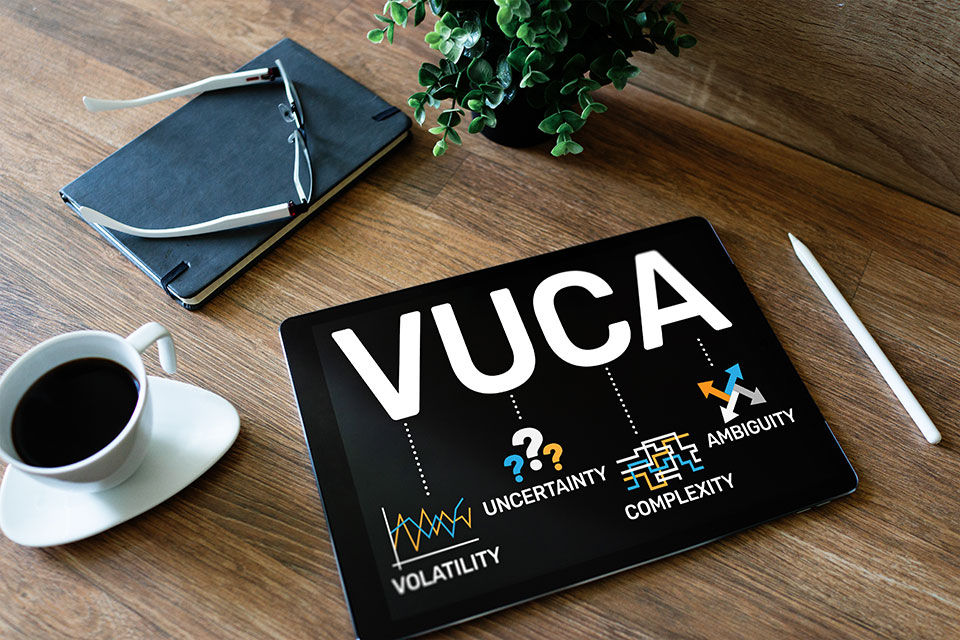 Robots have always been disruptive since their conceptual idea per se, the trademark sign of a VUCA (Volatile, Uncertain, Complex, and Ambiguous) environment. The idea that a machine can be made to carry out activities attributed to humans and sometimes ace them was somehow not easy to fathom. Interestingly, the origin of the word ‘robot’ is of academic interest when around a century ago, it was coined by Czech playwright Karl Capek in one of his plays.

Then another writer by the name of Issac Asimov coined the term robotics in 1941 and proposed the three laws laying the foundation for further studies in the field. Transcending from academics, the concept of robot and robotics have led to present day transition through the advent and evolution of industries over time and associated support services for human consumption. With the dynamic changes enforced during the pandemic times, Robot, entrepreneurs and CEOs are connected in the VUCA world. Look out for VUCA in Start-ups!

Can you probably ask Alexa® and have a reality check?

Though one can take a respite that robots taking over everyday tasks or being smart enough to look and behave like a human are still probably a few decades away from realistic commercial scale availability, there is no doubting that their intervention in our daily lives is no longer subtle. Demonstration of highly adaptive skills of robots can be seen in, the voice-based assistants in mobiles, kitchen appliances driven by smart applications, user-specific predicative ads and so on.

They are in fact assisting humans in daily life decision making by revealing to them their thinking pattern, their likes and other affinities. So in such a happening world of opportunities, where do the entrepreneurial community stand? Are they really picking up the signals for future-readiness in the field?

In some countries like China, South Korea, Japan to name a few, the concept of human-form or pet-form kind of robots are creating interest in the population but the area is still very nascent. Exempting a few exceptions, robotics has a long way to go to progress into meaningful cyborgs.

Undoubtedly, aesthetic and lifelike appearance of robots will grab the limelight from the people. The chances of business need for robots, getting spilled over and transgressing personal space of humans, are very high. So how do we and the CEO’s prepare ourselves to tackle the future defined by such a scenario?

All of us will agree that the speed of technology change and evolution is going to pick up mind-boggling pace in near future calling for strategic readiness in all domains of human existence. For populous developing economies where manpower resource is plenty, it is not easy to gauge the standing in terms of readiness for adopting robotics driven automation in labour intensive businesses.

Immediately the perennial question from ages pop up – what happens to the human workforce? But the question of how to achieve a just transition, balancing the human-robot mix in a business environment is potent for further exploration. The very thought, that the area remains largely untapped due to monopolistic existence of few established names should be the motivational trigger for entrepreneurs to make the dive and emerge with the pearl of novel opportune avenues.

The available depth for expansion of robotics based applications in Indian context presents an obvious scope but the dearth of technology firms looking to expand in this industry is a riddle as yet. Thus a gap exists for the entrepreneurial community to fill in. Some of these interest domains could be the cost optimisation towards end-to-end implementation of Robotics Process Automation solutions and moderating the impact on employment levels where the implementation is eventual.

The potential realignments envisaged due to Robotics Process Automation impacting the BPO offshore market is another area worth a dive. The future strategic ways and recommendations for companies with high readiness for use of RPA needs a lot of deliberation as well. Spotting the potential pitfalls and challenges foreseen can help identify opportunity areas which many have already gone after as the low-hanging fruit but the foresight glasses required to see the next important ones will be worth to put on.

Additionally, instilling confidence on the quality aspect in RPA programmed by humans will also require great depth. The field of robotics has a capacity to generate skill-based employment for technically skilled programmers, designers, scientists and researchers, with highly satisfying professional end rewards.

Are the future-ready entrepreneurs and CEOs willing to play-it-right is the question.

# Best Citizenship and Residency by Investment Programs.
# Richest People in New York and Their Net Worth, 2022.
# The World’s Top 10 CEOs Over 70 Years Old.
# These are the world’s most and least powerful passports, 2022.